Walk [Your City], Signs for Health

Every once in a while an idea emerges that is simple but brilliant. That’s what happened when urban planning student Matt Tomasulo wanted to increase walking in Raleigh, North Carolina. He created 27 signs that simply said, “It’s a __ minute walk to [destination].”

Since these first signs went up in 2012 Tomasulo founded Walk [Your City], and the signs have spread to 45 states and almost as many countries.

Walk [Your City] and the Health Crisis 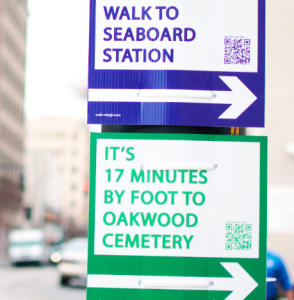 According to the CDC more than one-third of American adults are obese and “obesity-related conditions include heart disease, stroke, type 2 diabetes and certain types of cancer, some of the leading causes of preventable death.” Annually, this adds an additional $147 billion in medical costs. Meanwhile, more than one-third of American children are overweight or obese, and one-third are on track to become diabetics.

Over the past decade, there has been a series of studies that attribute obesity and its related illnesses directly to the automotive lifestyle and, better yet, to the automotive landscape. One effort found that for every additional five minutes Atlanta-area residents drove each day, they were 3 percent more likely to be obese. Another showed that drivers who switch to public transit drop an average of five pounds.

Comparison of walkable cities and auto-dependent suburbs yields some eye-opening statistics—for example, that transit users are more than three-times as likely as drivers to achieve their CDC-recommended thirty minutes of daily physical activity. Increasingly, it is becoming clear that them American health-care crisis is largely an urban-design crisis, with walkability at the heart of the cure.

Power to the Pedestrian By getting more people to understand they can walk to that park or library, Tomosulo’s efforts show promise for improved health.With a Kickstarter campaign to help other communities have their own signage campaigns, he developed an online process where people anywhere can write how many minutes it takes to walk to a certain destination. Walk [Your City] creates and ships quality signs that are placed on the streets. The signs can be scanned for directions.

Groups who want to create healthier communities take note. What’s a cheaper, faster way to improve health than getting people onto the sidewalks? Cities can often take years to create such signage campaigns. Through Walk [Your City], citizens can create 50 signs in a fraction of the time for as little as a few hundred or thousand dollars, as opposed to a couple of million.

“Road signage has traditionally been expensive and car-centered, leaving walkers and bikers by the wayside,” says the organization. “Walk [Your City] lets anyone from citizens to corporations quickly and affordably promote healthy lifestyles, public safety, and human-centered transit.